A forty minute drive to Rossiter, PA to 3 Ponds Farm was the longest haul yet to visit a farm, but it was well worth the trip.  Like the majority of the farms I've visited, the scenery that we passed was breathtakingly peaceful.  Arriving at 3 Ponds farm, we were greeted by Ken just coming off the tractor.  Ken, an extremely intelligent and kind man, can talk to you about topics that range from farming to government and GMOs to physical health.  He is so full of information on interesting topics, I could sit and converse with him all day, but alas Madelyn wanted to explore, so we started our farm tour.
Janet Huber, who you'll see every Saturday and Wednesday under her umbrella hitched to the back of her truck, is very passionate about her farm and her plants.  In the front of their house you'll find beautiful raised beds full of flowers and herbs like basil, sage, rosemary, chives, and dill. 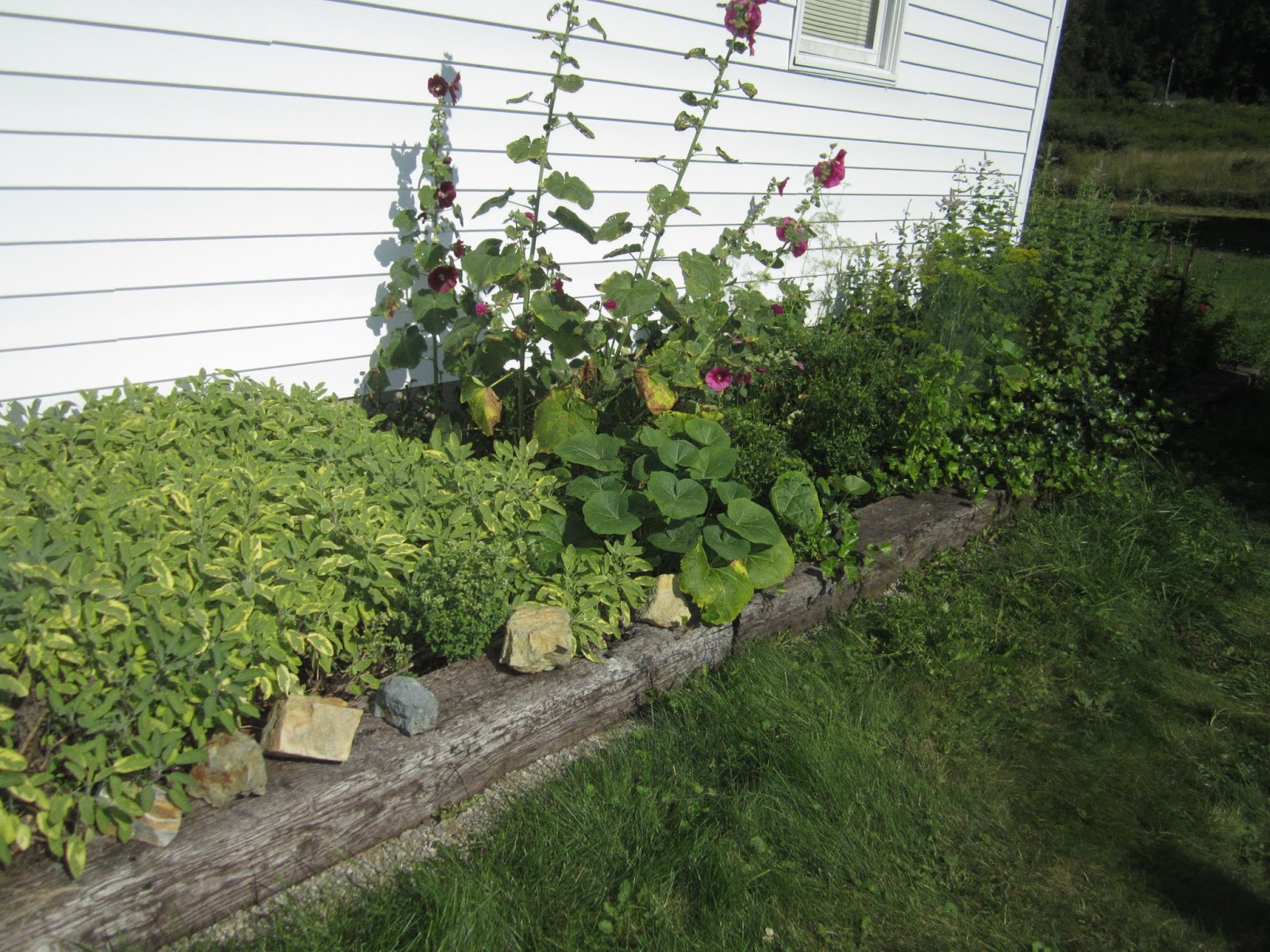 Once we rounded around the house the wonderful view of their chicken coop and very large garden greeted us.  They raise a small number of egg-laying chickens in a beautiful chicken house; however, they don't sell the eggs at the market (too many hoops to jump through).  While walking past the coop, Janet peeked in to see if any new eggs had been laid, and was excited to find one brown egg waiting to be collected.  Beside the chickens was a small area where corn was growing. Janet informed us that they grow that corn specifically for their chickens, how nice!  Next we came upon their strawberry bed with straw used as a natural weed barrier (no spraying here!)  Janet kindly stopped to pick a fresh strawberry for Madelyn, then continued our tour. We walked into their large fenced in garden to find rows upon rows of produce like beets, zucchinis (yellow and green), beans, peas, cucumbers, tomatoes, potatoes, peppers, and cantaloupe. 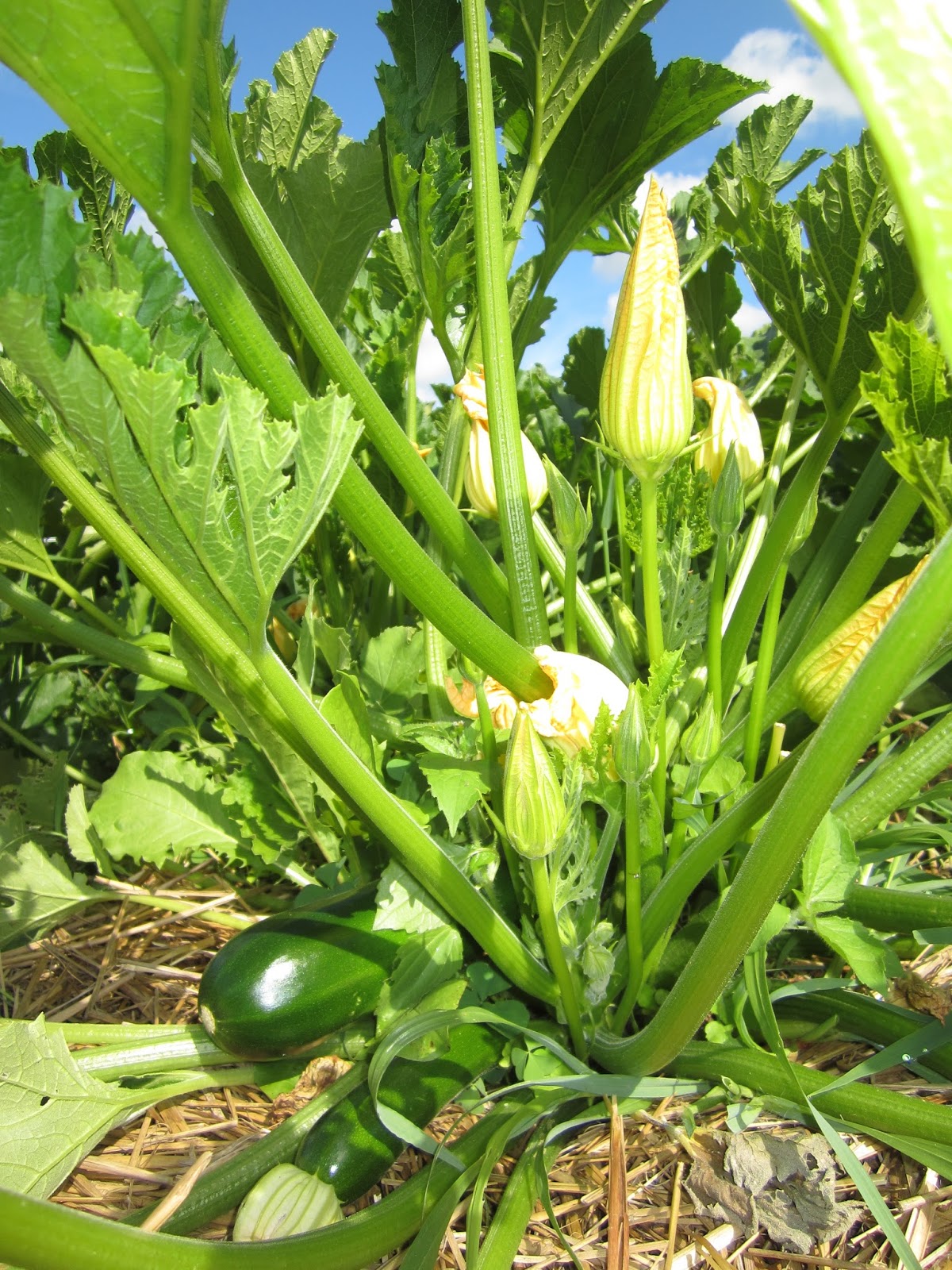 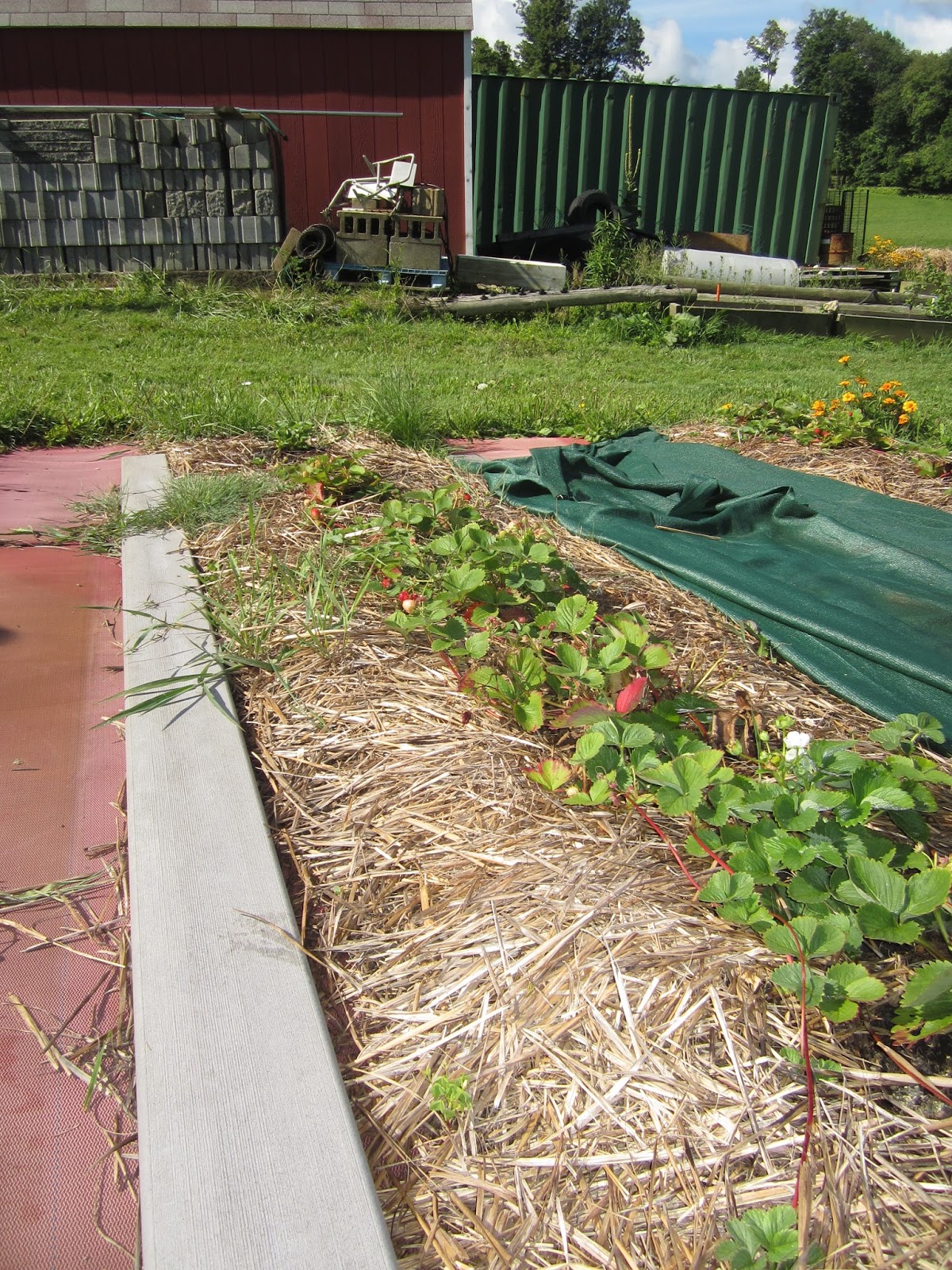 She showed us her harvest of garlic, and dug a fresh garlic bulb from the ground so we could have a souvenir to take home! She pointed to the area of the fence that just recently was taken down by a 10-point buck and then showed us her pickling cucumbers and shared more bounty from her garden with my cucumber-loving-daughter.  While walking around the garden, Janet spoke about how she and Ken came to selling their produce at the market.  In 2005 Ken started a large garden and Janet had said, "It's only the two of us, we might as well sell this." And so in 2008, 3 Ponds Farm started selling at the Indiana County Farmers' Market.  Both Janet and Ken grew up on farms when they were younger, and are both extremely knowledgable on all aspects of farming.  As we started making our way back to the car, Ken came off the tractor and joined into our conversation.  He said that from up on the hill I could get a great picture of the whole garden and the adjacent pond, so leaving Madelyn behind with Janet, Ken and I took a trip up the hill.  He was right, I snapped a fantastic picture of the farm and enjoyed hearing Ken talk about farming and their plans for the future. He showed me where he is planning on putting a pasture, in hopes of raising a special breed of lambs from Iceland, and took me across the street to the other 20 acres (they own 40 acres of land), where someday Janet hopes to have blueberries, and currently they have pear and apple trees. 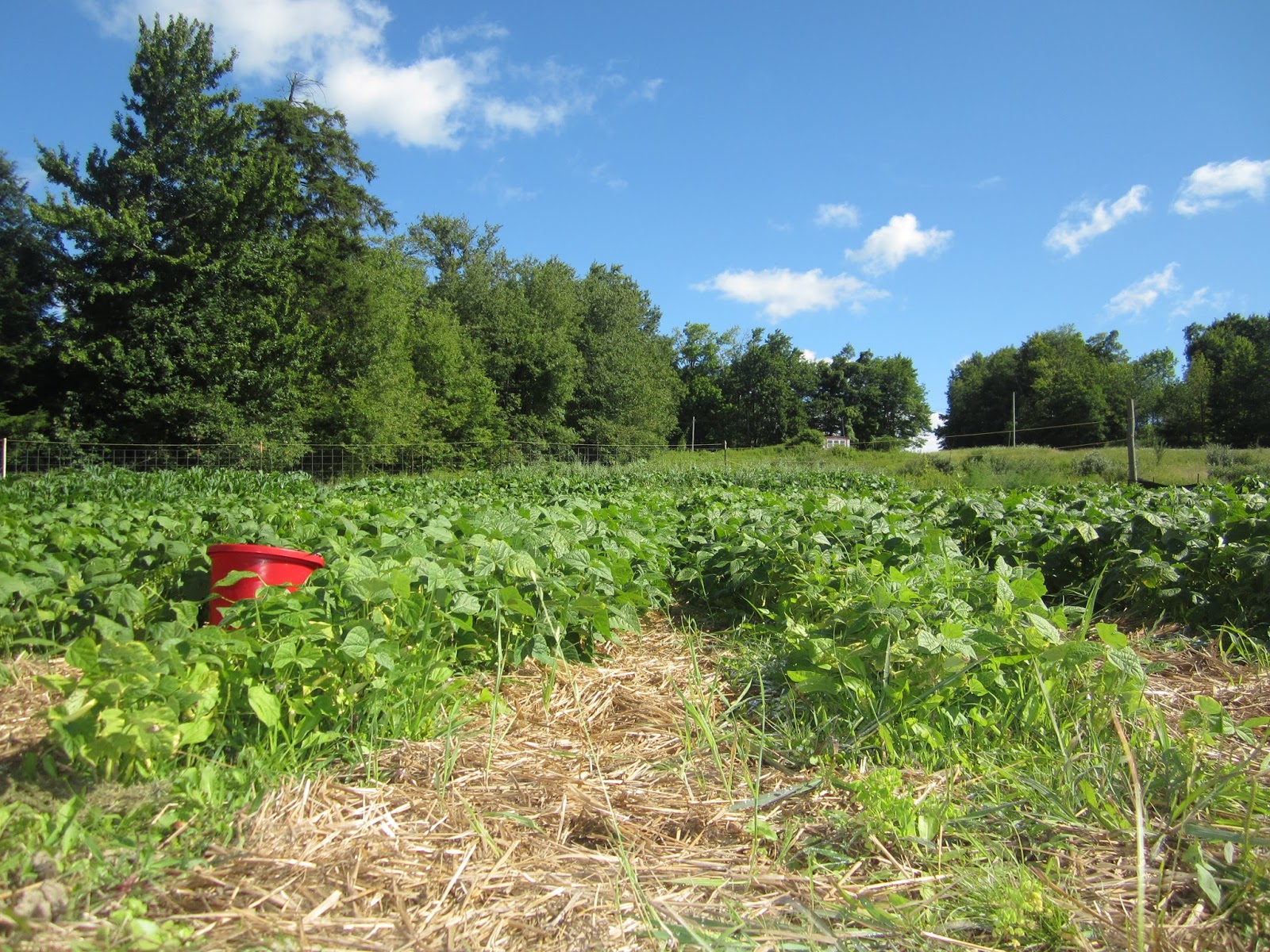 Other than selling at the Indiana Farmers' Market, Janet and Ken head to Smicksburg and sell half bushels of beans, beets and garlic in large quantities at the Smicksburg Auction.  Ken said that they sell their produce inexpensively because he would rather people be able to afford and buy the fresh produce than throw excess over the hill.  Before leaving 3 Ponds Farm, Janet and Ken lead me in the direction of Cameron's Blueberries U-Pick, who produce some of the blueberries you see at the market. They weren't open (hours are Tuesday & Thursday 7-7 and Saturday 7-noon), but I was able to snap a picture to show you this local blueberry haven. 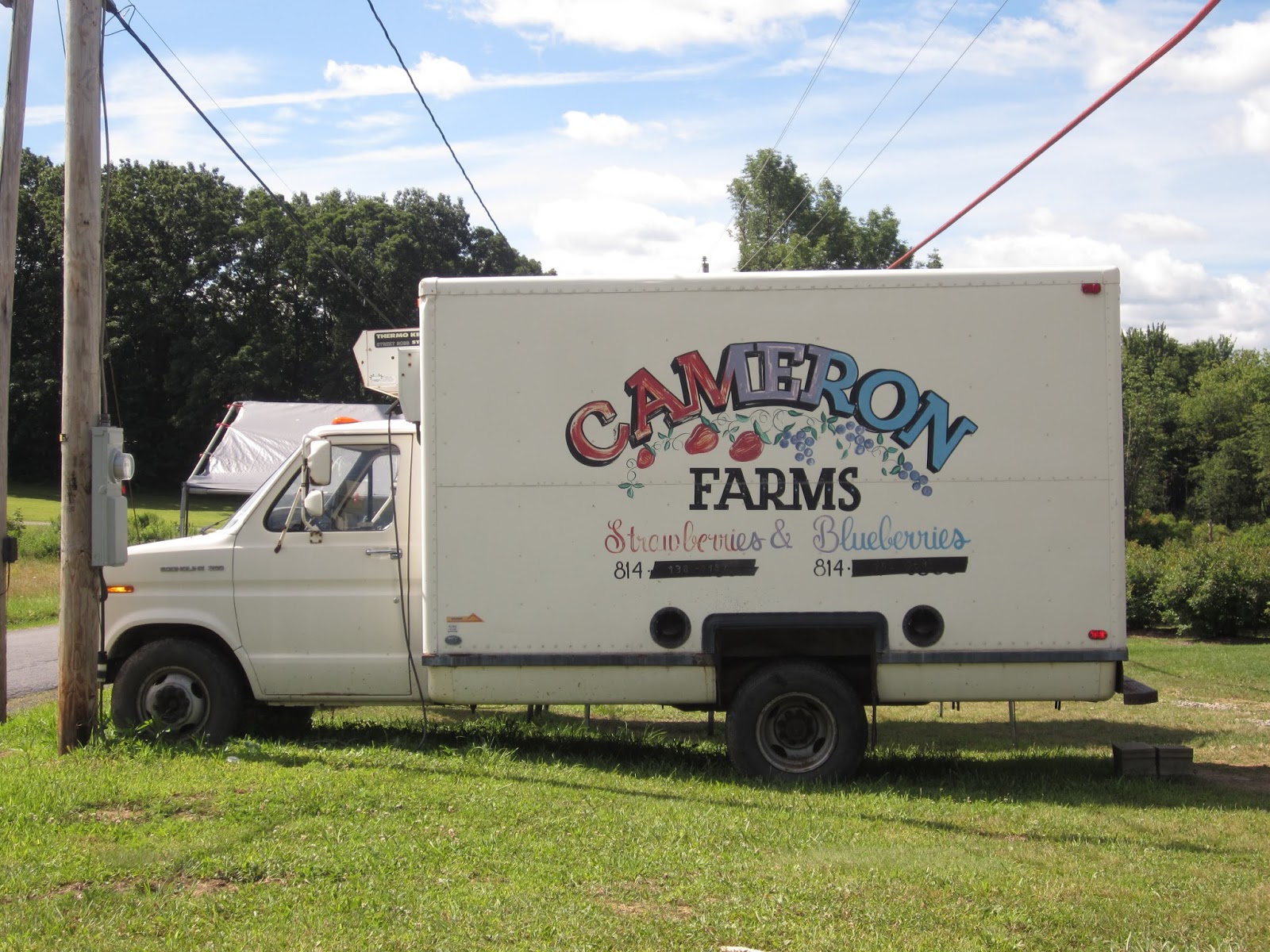 After each visit to all these different farms, I can't help but feel so lucky and fortunate to live in an area with an abundance of generous, happy, and hard-working farmers who care about the products they grow and the people they sell to.  Janet and Ken are yet another example of how special our Indiana County Farmers' Market is. 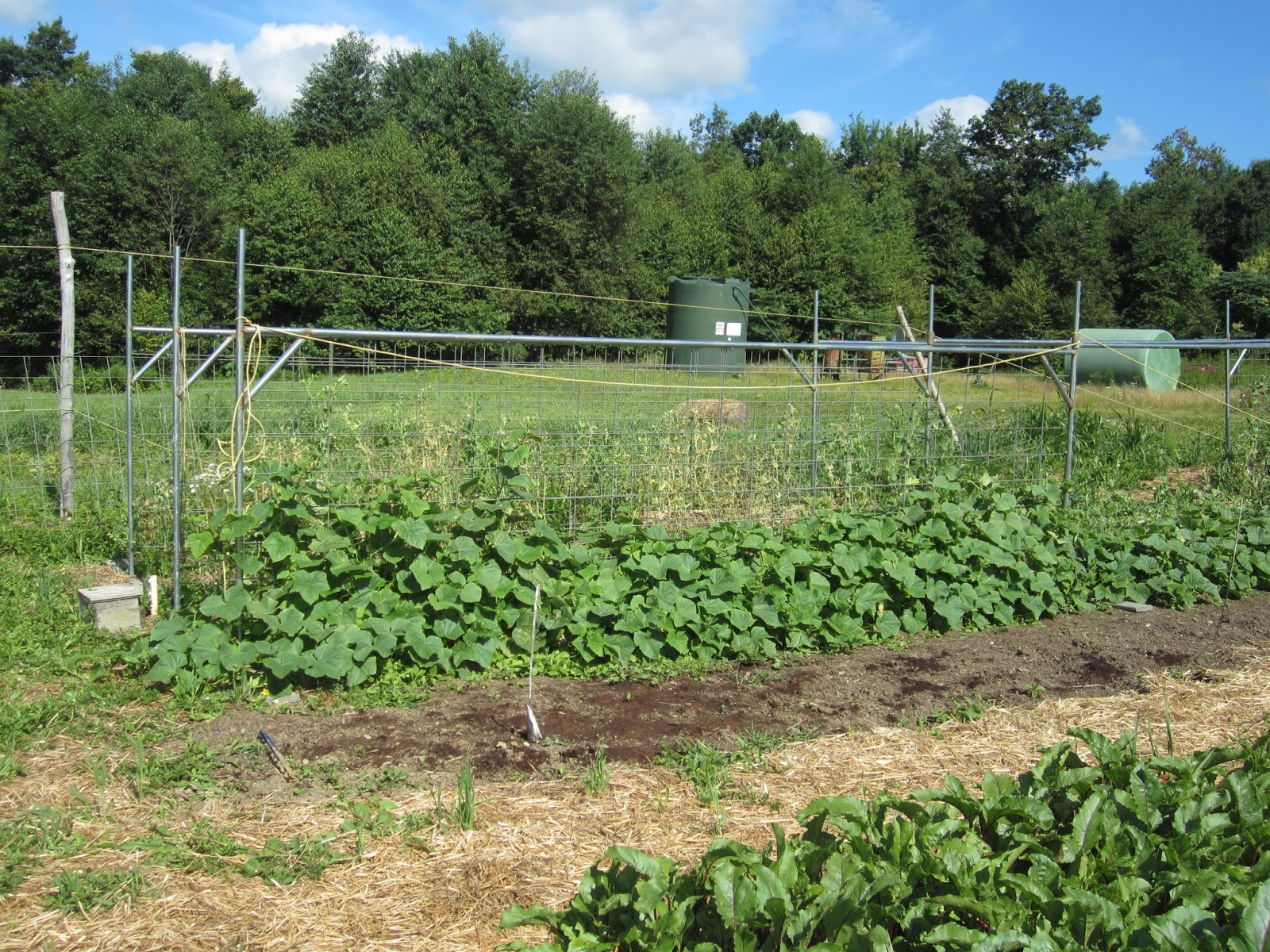 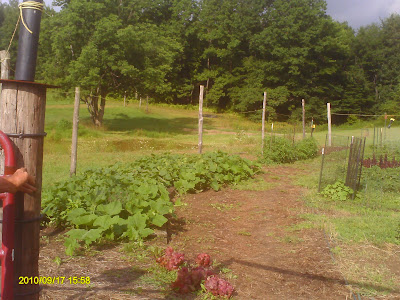 Janet Huber, owner of 3 Ponds Farm, has a lot of experience farming.  She grew up on a dairy farm in Hunterdon County, NJ.  Since then, gardening has always appealed to her.  In 2005 she bought a house on 39 acres, and her first summer there she planted a huge vegetable garden.  She enjoyed it so much, that in 2008 she decided to join the Indiana Farmers' Market.  Each year since, her garden grows bigger and bigger!  Along with friends and neighbors, Janet farms her garden located in Rossiter (Indiana County).  To Janet, the most important thing about farming is peace of mind.  Knowing where her food is coming from, especially with all the concerns about spraying and GMO's, she likes to know that she has control over her food.  "Being able to pick a fresh ripe strawberry right off the plant...there's nothing like it!" 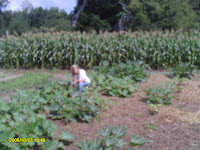 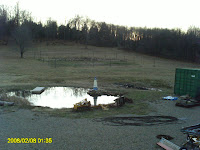